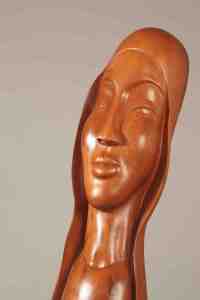 The art pieces, as well as the skills and talents used in creating these fine wood sculptures, will soon be available to all Texans. Artist Marika Bordes, of Seguin, has been selected to participate in the prestigious 2010-2011 Texas Touring Roster of the Texas Commission on the Arts. Bordes is one of only a handful of Texas artists who have been selected for the opportunity.

(Seguin) — Local Sculptor Marika Bordes is taking her art on the road. Bordes, a member of the Seguin Oakwood Art League and the Texas Society of Sculptors ,has been selected by the Texas Commission on the Arts to participate in its 2010-2011 Texas Touring Roster. Bordes is one of only 124 individuals and companies to receive the grant award.

By being chosen for the touring roster, the wood carving sculptor will receive the opportunity to offer presentations, demonstrations and workshops to adults and youth. Through these presentations, Bordes says she hopes to inspire people to appreciate the importance of art.

“It’s a great honor, although we applied for it, but after that when I knew about the process (and of ) getting in, I feel very blessed and honored to be with such a group of people. I do think by going all over to show people what we can do with wood, I will pass on the legacy that I received from my people to other people that will continue it,” said Bordes.

The state of Texas designed the Touring Arts Program to ensure that all Texans have the ability to enjoy performances and presentations in their own communities by what they call ‘outstanding Texas-based artists’.

“Artists on the Texas Touring Roster travel to communities across the state and perform in a variety of venues,” said Gary Gibbs, TCA executive director. “In addition to performances, they may also conduct workshops, master classes, residences, lecture-demonstrations or arts education components as a way to engage community residents. We are proud to offer the citizens of Texas access to such high-quality artistic talent.”

Gaye McElwain, director marketing and communications for the Texas Commission on the Arts, says Seguin should be proud of Bordes’ accomplishments thus far. She says selection for the touring list is limited to the elite and most creative artists and performance companies around.

“It is prestigious in the sense that those artists are going to be looked at by Texas presenters state wide to be brought into their communities to do workshops and exhibitions and performances — things of that type. So we at the Commission on the Arts want to make sure that the list that we are providing are all the highest quality, people who are good not only in terms of artistic product but that are also going to be a good addition to their community in terms of the way they can communicate about their artwork maybe do some educational outreach — things of that type,” said McElwain.

The Texas Commission on the Arts does not provide funds to artists in the Texas Touring Roster. Instead, TCA provides grants to arts presenters, schools, libraries, theatres and other non profits throughout Texas to help with the cost of bringing in companies and artists from the roster.

Bordes says what is particularly exciting for her is the opportunity to spread the word about Seguin as an arts destination.

“Here in Seguin we have so many talents and I’m experiencing it everyday. Actually, I have nine students, and we are going to have that exhibition in October. You are all going to see