Lately, I have come to understand that the value of any human being resides in his capacity to absorb and transform the elements received from the diverse schools of life. What a wonderful world!

In the beginning was The Word,  and

The word was spread around the globe

For the use of human beings.

Go and spread what you have learned,

For it will make humanity stand a little taller, and,

Your passage on planet earth

Will not be in vain

Honorees, Ladies and Gentlemen here present, it has been a pleasure to share  the insightful values of what we’ve all learned on our mother’s knee:

The power of language. 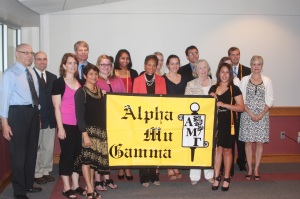 Today, I would like to take you to another world and share the journey with some of the children of other cultures who like you, this day, are walking barefoot.  Unlike you, tomorrow, the day after tomorrow and the following one, they will still be walking barefoot to school, because of their poverty.

In many countries the child’s first pair of shoes is a gift longtime remembered and cherished.  It is a rite of passage.  I see that the purpose of your actions is to understand others. By doing this you are learning to see the world in a different way.  So as you help others through this rite of passage, you, yourself are also maturing. 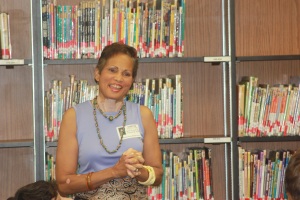 SEGUIN — A handful of junior high students walked around Briesemeister barefoot on Tuesday.

The seventh- and eighth-graders choose to walk around either barefoot or with only socks.

The students who are part of the Friends of Rachel clubs at the school joined the worldwide movement A Day Without Shoes, said club sponsor Mark Keddal.

“This was a student’s idea,” he said. “We were talking about character issues and bullying and things that people take for granted that might be perceived as cruel and we are trying to change the atmosphere. Part of our discussion was how we, as a small group, could to try to make an impact and somebody came up with the idea of participating in this Day Without Shoes for TOMS.”

TOMS is a shoe company that pledges to donate shoes to those without, according to its website.

“With every pair you purchase, TOMS will give a pair of new shoes to a child in need. One for one,” the website stated.

The children wanted to be a part of something bigger, Keddal said.

“This is a part of a world-wide effort to recognize that about a 1 billion people go shoeless, mostly children and there are a number of diseases that are caused by it,” he said. “There are a number of dangerous things that can happen being barefooted, other than disease.”

As part of the learning experience, the students got to spend their lunch time with local artist Marika Bordes, who talked about the country she is originally from and the poverty she saw in that country.

“I was born in Haiti,” she told the students. “And in my country the child’s first pair of shoes are a gift that is truly remembered and cherished. It is a right of passage. Here we are lucky. We take the use of shoes for granted.”

During her visit with the students, she praised their efforts to spread awareness.

“You are learning to see the world in a different way,” she said. “I think this is wonderful because it is not something of fashion. For you all to walk barefooted looked simple but why you are doing it is not. Just think of the many who don’t have the fortune to wear shoes. It is important for you to talk about it. This is not to make you feel guilty. You are lucky to have shoes but just think about the others that don’t.”

Keddal said the idea behind Tuesday’s movement was to raise awareness about those who barefoot — and not by choice.

“She is such a powerful presence and I figure if the kids remembered anything they would remember her,” he said. “She captivated them. I asked if she could come talk about a place where people lived without shoes.”

Hearing Bordes’ stories about Haiti and its people, those who live in poverty and the aftermath of the 2010 earthquake that shook the world, inspired a couple of the students.

One student said she wanted to sell bracelets to raise money to buy shoes for the countries who are without.

Another group wanted to know how they could donate items — clothing, shoes and other necessities — to Haiti. 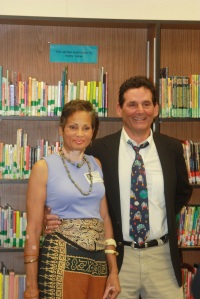