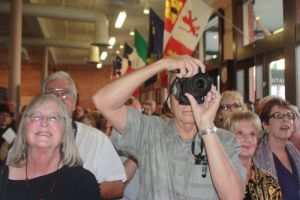 Seeing Gwaihir for the First Time

SEGUIN — A crowd estimated at 400 to 450 people turned out Saturday evening for the opening of “Visions of Wood” at the Heritage Museum in downtown Seguin.

The exhibit features wood sculptures done by local artist Marika Bordes and her students. “Visions in Wood” will continue through the end of the year at the Heritage Museum which is open from 11 a.m. to 4 p.m. Monday-Friday at the corner of River and Gonzales streets.

The exhibit is dominated by “Gwaihir: The Lord of Eagles, Master of Wind” which stands more than 15 feet tall and stretches up through a stairwell into the second floor of the museum.

“Gwaihir is here because of the generosity of a good friend,” Bordes said, referring to John Schwartz whose chinaberry tree became the raw material for the superhuman-sized sculpture.

During a visit to the Schwartz ranch, she saw a big tree that had fallen to the ground.

“I looked at it, and I thought it was interesting,” Bordes said.

She had done a sculpture of chinaberry wood commissioned for the Schwartzes 50th anniversary, and John urged her to go to work on the fallen tree.

“It challenged me,” Bordes said. Some nine or 10 months ago, she began working on the tree.

“He gave me space at his ranch,” she said. “That’s when I started working on it.”

At first, she worked on the tree where it had fallen. Schwartz had fenced in the area to keep the cattle away from it, and he later moved the piece into a barn on his property.

“He’s been very kind with us,” Bordes said.

As the work progressed, she brought out some of her students to help sand the wood.

When asked why she wanted them to participate, Bordes told of her sculpture teacher having her assist on a large project.

“I don’t want you to be afraid of any big project,” she said her teacher told her.

Bordes was amazed at the turnout Saturday. “I thought it was wonderful. I was not expecting all that,” she said Monday.

She noted that those attending included people from San Antonio, Austin, Kerrville, Blanco and elsewhere.